The Great Guitar Build Off... We Are Almost Finished… Or Are We? 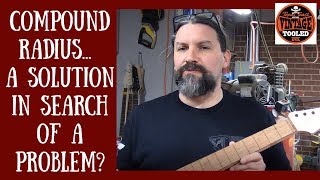 Compound Radius… A Solution In Search Of A Problem?

I’ll go ahead and say it… I’m sick of talking about this! It’s the sort of thing that guitar players geek out about in internet forums. There might not be as much written about this as say… Ford vs. Chevy or 9mm vs. 45 but as you know, these endless (and pointless) debates seem to be more fun for people who like to argue more than they like playing the damn guitar. Here at Texas Toast we have done several videos about the theory behind the compound (or conical radius) and